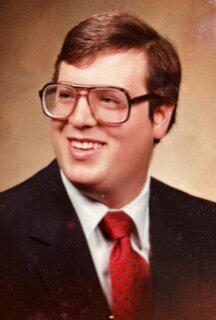 Robert Allen Banta, 57, of Lutz Florida passed away peacefully Friday November 4, 2022.   He was preceded in death by his parents Merrill L Banta and Lillian J Banta.   He is survived by his brother William (Maggie) Banta, sister Ellen Banta and nephew Liam Banta.

Rob was born  July 15, 1965 in Dearborn Michigan.  He graduated from Plymouth Canton High School in 1984.  He proudly served his country as a Chaplin’s assistant, in the United States Amy, from 1984 to 1986.  Rob graduated from Western Michigan University, with a degree in Economics, in April of 1990.   After college he worked at Kroger’s in Ann Arbor, first in the video department and later as a cashier.  He was known to be gregarious and treated everyone as a long time friend.  While in Ann Arbor Rob played bridge frequently, ultimately becoming a life master.  Rob became a member of  Alcoholics Anonymous August 25, 2000 and never touched alcohol again.  He was that rare individual that was able to conquer his addiction and maintain his sobriety for 22 years.  In 2007 Rob moved to Tampa Bay.  Rob was committed to helping disabled veterans and worked as a volunteer at James A Haley Veteran’s hospital.  While in Tampa he worked with multiple churches, ultimately becoming confirmed at St Paul’s Catholic Church.  During the pandemic he studied to become a member of the Knight’s of Columbus reaching the fifth degree.

The internment of Rob’s ashes will be done privately at Bay Pines National Cemetery.

To send flowers to the family or plant a tree in memory of Robert Banta, please visit Tribute Store