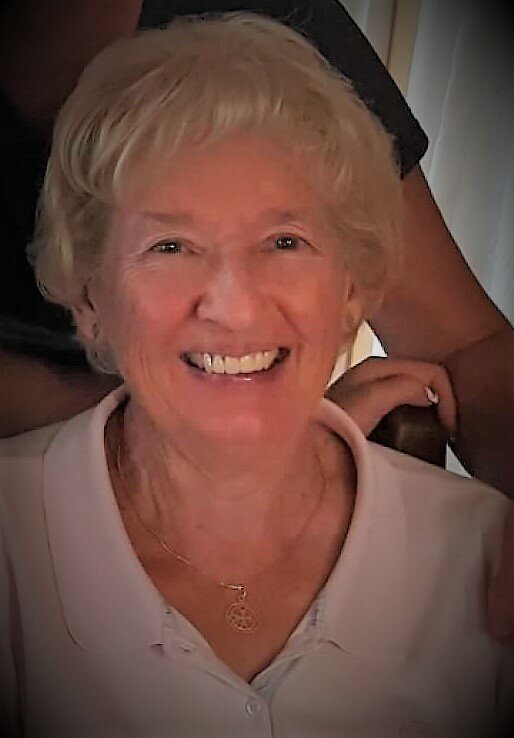 Preceded by her loving husband, Charles Rahm. Her parents Walter and Ella Carey, one sister Christina, and brothers; William, Harry, and Johnny.

Survived by her daughter Michelle (Scott) Mason and granddaughter Skyler Mason of Odessa, Fl., as well as several nieces and nephews.

Joan courageously battled Alzheimer’s for nine years. Although the disease took so much from her in the last few years, in no way did it define who she was or the way she lived. Joan will always be…

A loving wife and caregiver to Chuck. From keeping Chuck in line (which was quite often) to caring for him in their later years.

A fierce protector of her family. Whether it was facing the challenges of raising a daughter in foreign countries or the defensive driving skills she perfected on the Autobahn.

A quiet and reserved person who never was in need of the spotlight, but at times would have the loudest laughter in the room.

To say Joan loved her animals would be an understatement. Many friends would comment on “how they would like to come back as Joan’s pet in another life”

Her ability to see the world in black and white (no gray areas please) was second to none.

A traveler who enjoyed trips with family and friends

Ardent supporter of the American political system. It was always best to be prepared with the facts if you ever felt the urge to have a political debate at the dinner table.

An uncanny organizer who could turn a football tailgate party into a five-star meal.

A loving Mother and “Mimi”. Nothing brought Joan more joy and cherished moments than spending time with Michelle and Skyler. From Michelle participating in equine events to Skyler competing in ice skating. Taking in plays every chance they had. Driving the roads on another shopping excursion with her girls. Spending many days baking cookies at Christmas. In 2019, they were fortunate to travel to New York one last time to see family, friends, and visit old places, but more importantly the three of them together, making new memories to last a lifetime.

In lieu of flowers, memorials in Joan’s name made to the Humane Society of Pinellas, 3040 FL 590, Clearwater, FL 33759 would be appreciated.

To send flowers to the family or plant a tree in memory of Joan Rahm, please visit Tribute Store

Share Your Memory of
Joan
Upload Your Memory View All Memories
Be the first to upload a memory!
Share A Memory
Send Flowers