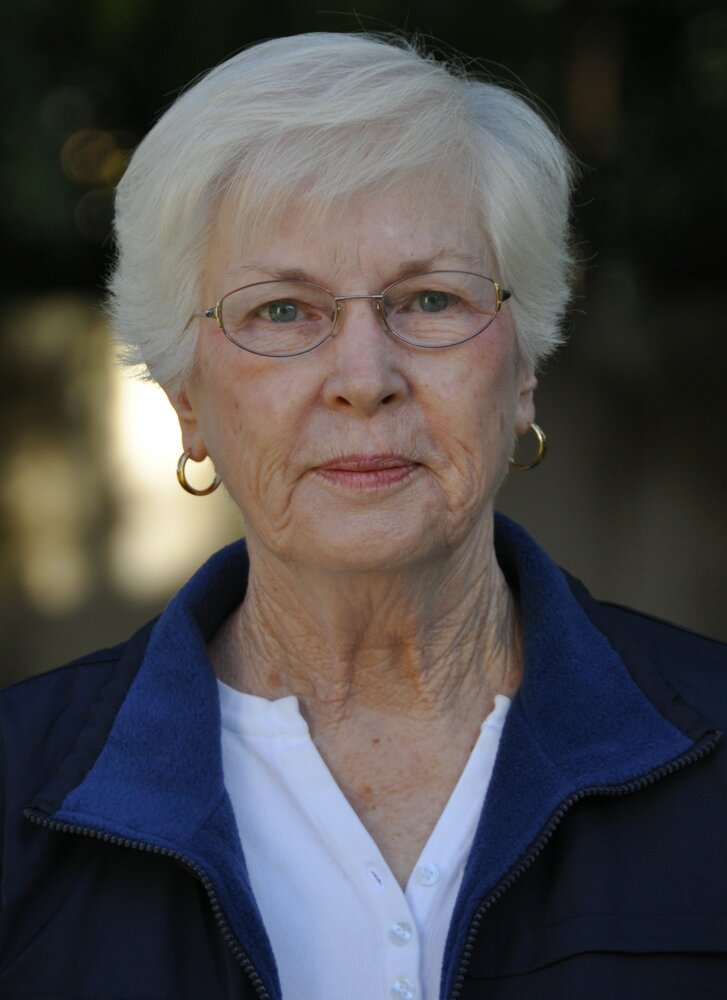 Peggy, as she was known to family and friends, passed away peacefully on August 31 in her favorite recliner with her husband, John and daughter, Mary Rebecca (Becky) Wade by her side. She was born December 30, 1939 in Horry County, South Carolina to Mary Johnson Aspinwall Grainger and Dallas Grainger. Dallas passed when Peggy was a small child, and Mary, with Peggy’s two sisters, Connie and Louise, moved to Screven, Ga where Peggy lived most of her childhood, earning spending money working in the local drug store and movie theater. Her mother married Palmer Aspinwall giving Peggy a large family of stepbrothers and stepsisters. Peggy graduated from Screven High School and worked as a long-distance operator in Brunswick, GA, until she was accepted to the Grady Memorial Hospital in Atlanta where she completed her Registered Nurse training in June, 1961. Peggy and the other students, in starched white aprons, gained practical experience working on the hospital wards and ER while also managing a demanding course schedule. Peggy met her future husband, John M. Taylor, Jr., then a Georgia Tech student, at a Friday night dance held in the Nursing School dorm. They were married July 15, 1960 in Chesterfield SC. (Yes, almost a year before her graduation, against Grady rules.) John had taken the Summer off school to help on his Dad’s tobacco farm in NC and they spent the next day putting in a barn of tobacco for their honeymoon. After graduation Peggy worked as an RN in several Atlanta hospitals and the Ga Tech infirmary until John graduated from Ga Tech in 1962 and was commissioned in the US Army. Peggy then became the consummate Army wife and mother, working as an RN in doctor offices, hospitals, even as a Public Health nurse as the Army moved her growing family around the country and overseas. She was blessed with son John M. Taylor III and daughter Becky, who grew up as Army brats living on or around Army bases in Germany and the States, from Florida to Virginia. Peggy and John retired to Lutz, FL in 1993 where Peggy, before the days of the internet, kept her neighbors up to date with a monthly newsletter and a directory listing every kid and pet in the Woodridge neighborhood. She loved every one of them and could call them by name as they came by. She especially loved Christmas when she would host Santa on her front porch and feed the neighborhood on laden tables set up in the driveway. She especially enjoyed the 101st Airborne Association social events, reminding her of the good friends and fellowship of Army life. She is survived by her loving husband John, Becky and her daughter Wendi, Wendi’s husband Philip Colvin and their son Sean; son John and his daughters Johanna and Meghan, and wife Jill Bastion Taylor; and many, many dear relatives: Aspinwalls, Johnsons, Grainger, and Taylors. If you knew Peggy, you know how much she loved every plant in her yard, so in lieu of sending flowers, plant something pretty in your yard.
A Funeral Service will be held at Loyless Funeral Home on Monday, September 20, 2021 at 11:ooam. The family will receive friends one half hour prior for visitation. Interment will be held on the same day at Florida National Cemetery in Bushnell, Florida at 12:30pm.

To send flowers to the family or plant a tree in memory of Doris Taylor, please visit Tribute Store

Share Your Memory of
Doris
Upload Your Memory View All Memories
Be the first to upload a memory!
Share A Memory
Send Flowers