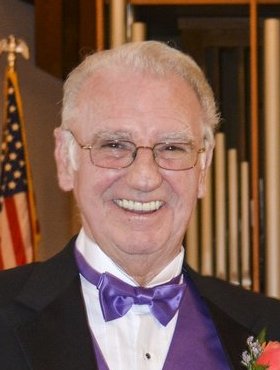 MANLEY, Gerald Herbert "Jerry", 83, of Wesley Chapel, Florida died July 17, 2021.  He was born in Toronto, Canada and moved to Florida in 1968 with his first wife, Mary, and children Heather and Scott, becoming a U.S. citizen at a later date.  He worked in the automotive business at many dealerships on the east coast of Florida for almost 50 years, finally settling in Merritt Island from 1985 - 2006, then moved to Wesley Chapel, Florida, following his first wife, Mary's death.  He attended St. Clement's Episcopal Church in Tampa.  He married Jennifer Lyon-Hall in 2014.  He is preceded in death by his first wife Mary Lea Manley.  He is survived by his loving wife Jennifer; two daughters, Heather (Marty) Duytschaver, Elizabeth (Alan) Lyon-Hall Mirowsky; two sons, Scott Manley, James (Beth Reite) Lyon-Hall; Ten grandchildren and Six great-grandchildren.  A Memorial and Celebration of Jerry's Life will be held on Saturday July 24, 2021 at 1:00 p.m. at St. Clement's Episcopal Church, 706 West 113th Avenue, Tampa, FL  33612.  Donations in lieu of flowers may be sent to the American Cancer Society or to Feeding Tampa Bay.

To send flowers to the family or plant a tree in memory of Gerald Manley, please visit Tribute Store
Saturday
24
July

Share Your Memory of
Gerald
Upload Your Memory View All Memories
Be the first to upload a memory!
Share A Memory
Send Flowers