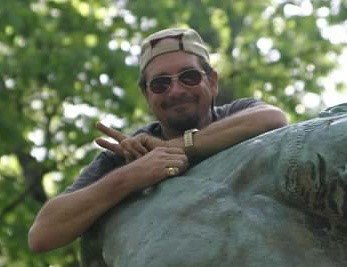 Pat was born in Springfield, MO, July 29, to Wanda June Young and Oscar David McMahon. He was undeniably and forever June's favorite child.

Pat was a computer technician at Walgreens DTR for 29 years, where he was a much loved and respected coworker and mentor.

Pat was a lover of the written word and was a live music enthusiast; an amateur photographer, and appreciator of the arts and the natural world. Forever a free spirit and hippie at heart; he was serious and accomplished yet never lost touch with his inner child. He approached life with a playfulness and youthful vigor that drew others to him.

Pat was fast friends with all who had the pleasure of meeting him, and he treasured those friendships for life. He had the gift of gab, and was a great listener. He was everyone's best friend.

Family ties were of the utmost importance to him, and he was a constant supporter of and confidant to his siblings, cousins and others. Though he never had children of his own, he was an influential figure in the lives of his nieces and nephews; he celebrated their accomplishments no matter how small. He was a surrogate father and grandfather to Kara and Sage, and there was never a single event, no matter how trivial, where he couldn't be seen cheering Sage on.

All who knew Pat have only good and kind things to say of him. Words cannot express how deeply he will be missed. Pat was not just one of the good ones, he was one of the best ones.

Pat is survived by his brothers, partners in crime, and fellow critics of the powers that be: Timothy Miles and Steven Eugene McMahon; his nieces: Shelly Brandenburg, Lesa McMahon-Lowe, Kara Hall, and Michaela McMahon; his nephews: Kim Jones, David Jones, and Tim Jones; his great nieces and nephews:  Jared, Ashley, Anastasia, Dayle, Jordan, Kanaan, Sage (who was also his grossly underpaid yard boy), Hannah, and Alexia; four great-great nieces and nephews; his uncles and aunt: Gene, Franklin, Francis, and many beloved cousins; his neighbors of 32 years Brian and Sharon who were like family, as well as many other dear and cherished friends.

Welcoming him with open arms to the great hereafter are his parents June and Dave, his sister Sandy, brother Mike and sister in-law Vicki, and great nephews Austin and Ashton. May he join them in peace and serenity, awaiting the day we too shall joyously reunite.

The family is planning a private ceremony to release his ashes into the gulf where they can rejoin with our Mother Earth.

To send flowers to the family or plant a tree in memory of Patrick McMahon, please visit Tribute Store

Share Your Memory of
Patrick
Upload Your Memory View All Memories
Be the first to upload a memory!
Share A Memory
Send Flowers