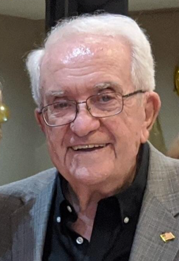 Michael John Conigliaro, Sr. was called home for a tee time with the Lord at 7 a.m. on September 20, 2020. He was 90 years young. Mike was born on January 6, 1930 in Bronx, NY.  His idyllic childhood days were spent in Sparkill, NY and Piermont, NY with his loving parents Salvatore and Anna Conigliaro and brothers Vincent and Sal. After graduating from Tappan Zee High School, Mike joined the United States Air Force and enjoyed serving his country as a flight instructor at Mathers AFB in Sacramento, CA and Luke AFB in Phoenix, AZ. He trained pilots on how to fly by instrument using a Link Trainer; the precursor to flight simulators.

In 1954 Mike met the love of his life, Patricia Atwell, while vacationing with friends at the historic Sunny Hill Farms Resort in the Catskill Mountains. They were married in 1956 and raised three children in Massapequa Park, NY.  Mike was active with the kids coaching little league baseball and introducing them to Golf as young teens while balancing a very demanding job in insurance. His work ethic set a great example for his children and in 1971 Mike was recognized by Metropolitan Life as the #1 Sales Manager in the country.

In 1985, Mike was offered an attractive promotion to move to Tampa with Metropolitan Life in the role of the Southeastern Marketing Manager.  This was a wonderful opportunity, not only to move to sunny Tampa, but to also be closer to his brother Sal and family and to play more Golf.  Mike was fortunate to win several club championships,  play in a few Pro-Am tournaments, and meet many Golf legends.  He was very proud of his Golf achievements, especially making 6 HOLES IN ONE,  but even more grateful for the friends he made along the way.

In 2005, Mike and Pat came to reside in The Groves community in Land O’ Lakes.  Mike flourished at The Groves where he played Golf at least three times a week, joined a Bocce Ball League with Pat, and volunteered with the Florida State Golf Association as a Golf course rater with many of his Groves Golf pals.  He and Pat also found time to work the local and national elections for Pasco County.

Mike was a devoted husband of 64 years to Pat and the loving father of Michael Jr. (Helen), Patty McDermott (Bill), and Tom (Lisa). He was an adoring “Poppy” to his eight grandchildren, and 3 great granddaughters. He cherished his nieces, nephews, and multitude of friends - who were all drawn to his enthusiasm for life, sense of humor, positive attitude, and ever flowing words of encouragement.

He will be missed beyond measure by all who knew him.  We will mourn his passing but celebrate the wonderful life he led and recall what he often taught us, "Judge not and thou shall not be judged".

A Memorial Funeral Mass will be offered on Tuesday, October 20 at 11 o'clock am at St. Timothy Catholic Church 17512 Lakeshore Rd. Lutz, Florida 33558. The Mass will also be live streamed by following the following link:

In honor of Mike’s love for Golf, please consider making a donation to Birdies for the Brave - www.birdiesforthebrave.org.

Share Your Memory of
Michael
Upload Your Memory View All Memories
Be the first to upload a memory!