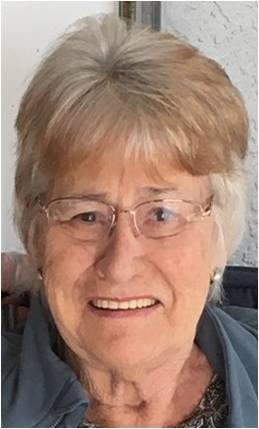 Diana Evelyn Walters, 88, of San Antonio, Florida passed away on April 1, 2020.   She was born in Portland, CT on Oct 1, 1931 and lived for many years in Pawtucket RI.  She moved to Florida in 1973 and lived most of her earlier years in Tampa.  She later retired in Homosassa, FL before recently moving to the San Antonio/Land O Lakes area.

Diana worked in a variety of industries throughout her life including textile, electronic assembly, and retail and was very talented at sewing, knitting, piano, and cooking.  Her true joy was her family.  What she valued most was the time she spent with children, grandchildren and great grandchildren.

Diana was preceded in death by her father Joseph Paquette and her Mother Grace (Lambert) Paquette, sisters Jeanette Geoffrey and Georgette Newsham, and brothers George, Gerald, and James Paquette.

She is survived by her daughters and sons- in-law Christine & Guy Miller, Brenda Olsen, Donna and Mike Gricoski and sons and daughters-in-law George & Annette Breault, David & Maureen Breault and Raymond Breault.  Her extended family included 13 grandchildren and 9 great grandchildren as well as many nieces and nephews.

A memorial service will be held at a later date.  In lieu of flowers the family requests any memorial donations be made to the American Heart Association.

To send flowers to the family or plant a tree in memory of Diana Walters, please visit Tribute Store

Share Your Memory of
Diana
Upload Your Memory View All Memories
Be the first to upload a memory!
Share A Memory
Send Flowers