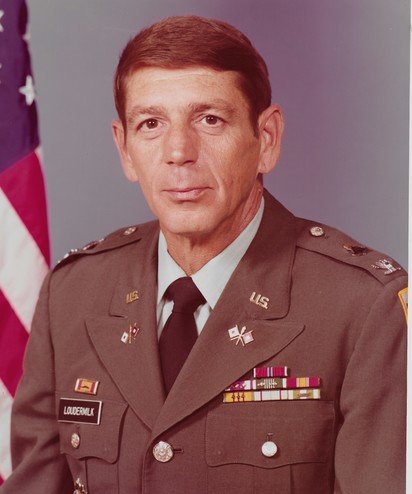 Colonel Roy Lee Loudermilk, Jr. (United States Army, Retired) departed at age 85 to his final assignment on December 1, 2019. He is survived by his wife of 30 years, Sharlene.

Roy was a native of Oak Ridge, Tennessee. He earned his bachelor’s degree from Tennessee Technological University where he also served as class and student body president. He later received his master’s degree from Shippensburg University.

In 1956, Roy was commissioned as a second lieutenant in the U.S. Army Signal Corps.

His final duty station was at MacDill Air Force Base with the U.S. Strike Command and U.S. Special Operations Command.

Following his retirement in 1987, he and Sharlene were married in Tampa.

Roy then became employed as a U.S. Department of Justice Chapter 7 bankruptcy trustee and assistant at a local law firm.

In addition to his commitment and service to our country, Roy also made time to serve as a volunteer.

His strong faith and spiritual commitments led him to serve as a Stephen Minister and leader at several local churches. He also chaired leadership boards and served on trustee and finance committees. He led adult worship groups and taught Bible classes.

He frequently volunteered at Fisher House.

An avid golfer, Roy attended the Masters and other national golf tournaments throughout the years. He enjoyed being active and often played racquetball, in addition to jogging and walking.

The funeral service to honor and celebrate the life of Roy Loudermilk will be held on Saturday, January 18, 2020, at 9:30 AM (visitation with family at 9:00 AM and following the service) at St. James United Methodist Church, located at 16202 Bruce B. Downs Boulevard; Tampa 33647. The service will be officiated by Pastors Tony Fotsch and Dwight Loomis. There will be a private interment with military funeral honors immediately thereafter at Florida National Cemetery, Bushnell. Funeral arrangements are provided by Loyless Funeral Homes.

In lieu of flowers, memorial donations are suggested to St. James United Methodist Church (stjamestampa.org), the Humane Society of Tampa Bay (humanesocietytampa.org) or a charitable organization of your choice.

To send flowers to the family or plant a tree in memory of Roy Loudermilk Jr., please visit Tribute Store
Saturday
18
January

Share Your Memory of
Roy
Upload Your Memory View All Memories
Be the first to upload a memory!
Share A Memory
Send Flowers