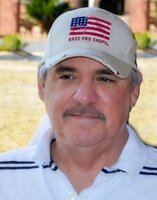 Michael Young, 69 of Lutz Florida entered into eternal rest unexpectedly, but peacefully in his sleep on Tuesday September 13, 2022. Michael was born in Milford, Connecticut then moved to Florida in 1960. He served in the United States Army, stationed at Atlanta Army Depot. Michael’s occupation was a cable contractor, but he pursued a passion for music and loved playing his guitar. He had a strong belief in God and was a member of St. Lawrence Catholic Church in Tampa. He loved being outdoors whether he was swimming or doing yard work, he was always open for a new adventure. Michael had a rare understanding of what was important in life which simply put, was his love for his family. Michael was married to his loving wife and soulmate Linda M. Burns-Young for 44 years at his passing. He was a loving and devoted Father, along with being an excellent provider to his nine children Elvis (Vlada), Matthew (Cheryl), Jacob (Jennifer), Joshua (Kristie), Adam (Samantha), Gabrielle (David), Jordan (Marie), Arielle, Izabelle (Alexander) and his loving dog Ella. He is also survived by seven beautiful grandchildren whom he loved Danielle, Liv, Ethan, Grayson, Valkyrie, Dainger, and Kylie. Michael was preceded in death by his parents and his in-laws Lenford and Rhoda Murrhee Burns along with Grandmother Vera Shaw whom he remained very close to throughout the years. He also leaves behind two close brother-in-laws George and Buddy Burns, along with three cherished nieces: Glenna, Cindy, and Darlene. He also leaves behind a favorite Aunt Gloria Shaw, special sister-in-law Diane Burns and many cousins, great nieces, great nephews, friends and other family that he adored and loved.