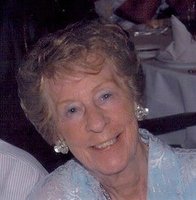 Dalarie Barbara Selland (age 84) of Salisbury, Maryland was unexpectedly called to be with the Lord on Friday, February 14, 2020 in Tampa, Florida.  She was surrounded by each of her four children at the time she took her last breath.

Dalarie was born on July 31, 1935 in Minot, North Dakota to Lawrence and Barbara (Hage) Krumwiede.  She was married on June 5, 1955 in Minot, ND to Richard “Dick” Duane Selland. She graduated from Minot High School (Class of 1953) and enjoyed her work as a Bank Teller after school and during the time her husband served in the Navy while they lived on both the West and East coasts (from San Diego to Norfolk).

Dalarie is survived by her four children: Gregory Richard Selland of Spring Hill, FL, Jeffrey Duane Selland (and Lynn) of Charlotte, NC, Barbara Ann Murray (and Mike) of Ocean City, MD and Richard Dirk Selland (and Henry) of Tampa, FL.  She was the attentive Grandmother of twelve grandchildren: Brittany (and Todd), Jessica (and Jorge), Brandon (and Lauren), Christian, Clay (and Nia), Joey, Blake, Morgan, Meghan (and Jimmy), Michael, Cameron, and Caleb.  She also had two great grandchildren: Clayton Joseph (CJ) and Connor.  She is predeceased by her parents, Lawrence and Barbara Krumwiede, her husband Richard Selland and her brother Darrold Krumwiede.

To her children, Dalarie will be remembered for her incredible cooking (from her famous goulash, to her meatloaf and coleslaw to name a few dishes) and her motherly love. To the community of the Eastern Shore of Maryland, Dalarie was known for her many years of volunteer work including, the Junior Board at PRMC, the Women of Elks, the Women of the Moose, and Soroptimist International. She also enjoyed playing slots at the casino and traveling on cruises.

Dalarie will be buried next to her husband and parents at Parsons Cemetery in Salisbury, Maryland in a private ceremony in honor of Dalarie’s wishes.  In memory of Dalarie, memorial donations may be made in her name to a charity of your choice.